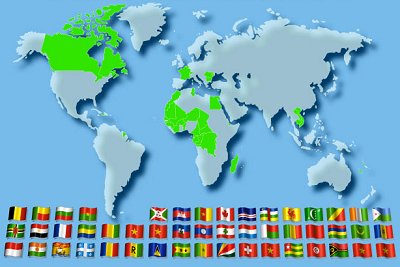 The Minister for Foreign Affairs Gilbert Saboya together with the Director of the Department for International Relations and Cooperation of the Ministry for Foreign Affairs Gemma Cano and the Embassador of France in Andorra Ginette de Mata took part in the 15th Summit of OIF (Organisation Internationale de la Francophonie) member-states that was conducted in Dakar (Senegal). Among the discussed issues: countering the terrorism at French speaking area, the ways of coming out of economic crisis as well as  the tools and results of unemployment diminishing in all Francophone member countries.

In his speech  Gilbert Sunyé emphasized a great importance of OIF  (Organisation Internationale de la Francophonie), its strive to the democracy and human rights respect. He noted that the activity of Andorran international organizations is based on the development of common values with OIF, especially what the objective to civil society democratization is concerned. Among the major goals of the international organizations of Andorra he called combating the climate changes.

On the Summit completion, Gilbert Sunyé conducted a bilateral meeting with the Minister for Foreign Affairs of Luxemburg Jean Asselborn in Dakar—the parties discussed the perspectives of cooperation between Andorra and EU countries. Gilbert Sunyé also had a meeting with Deputy Minister for Foreign Affairs of Mexico Carlos Alberto de Icas Gonzalez and the Minster for Culture of Costa-Rica Elisabeth Fonseca—the officials discussed the agenda of the upcoming Ibero-American Conference of Heads of State and Governments (Cumbres Iberoamericanas de Jefes de Estado y de Gobierno) that will take place in Mexico in Veracruz state on December, 8-9 of 2014. It should be recalled  that Ibero-American zone encompasses Latin America, Spain and Portugal.

Meanwhile, OIF member-states have appointed a new General Secretary. For the first time in history, a woman was appointed to this position: the ex-Governor-General of Canada.  On this position she succeeded the ex-President of Senegal Abdou Diouf that has been the Head of OIF for 12 years.  The work of Diouf was highly appreciated by all OIF member-states, says the official report of Senegal Government.

OIF unifies more than 50 Francophone countries. One of OIF goals is to advance French language and culture. Currently, the amount of French language speakers makes up about 200 mln people.