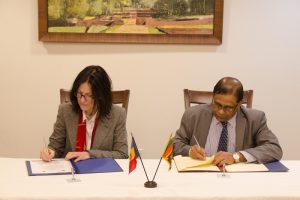 Permanent Representative of Andorra to the United Nations Elisenda Vives and her counterpart from the Democratic Socialist Republic of Sri Lanka Amrith Rohan signed on 30th November a document confirming the establishment of diplomatic relations between the two countries.

The signing ceremony took place at the Permanent Mission of the Democratic Socialist Republic of Sri Lanka in New York.

“The establishment of diplomatic relations is a demonstration of the intentions of two countries to strengthen friendly relations and cooperation in political, economic, and cultural spheres under Vienna Convention on Diplomatic Relations of 18 April 1961, and following the principles and fundamental norms of the UN Charter and international law”, reports the Government of Andorra.

Sri Lanka is a 139th country Andorra has diplomatic relations with.