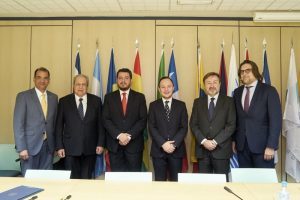 Andorra participated in the conference of justice ministers of Ibero-American countries. The event took place in Madrid. The delegation of the principality was headed by the Minister of Justice, Social and Internal Affairs of Andorra Xavier Espot – he signed the protocol on the accession of Andorra to the conference of justice ministers of the Ibero-American countries (COMJIB).

Andorra’s participation in COMJIB is a part of the strategy of the Andorran government, based on the expansion of international judicial cooperation in the countries of the Ibero-American space.

In his speech, Xavier Espot said that over the past 15 years, Andorra ratified many conventions and became a member of the United Nations, as well as the Council of Europe. Currently, Andorra fully supports the 24th international document on judicial and police cooperation.