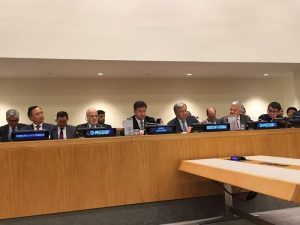 The delegation of Andorra, headed by PM Antoni Marti and FM Maria Ubach, took part in the 10th Conference to Promote the Entry into Force of the Partial Nuclear Test Ban Treaty. The conference was held in the framework of the 72nd General Assembly of the United Nations in New York.

At a meeting, in which leaders of countries of the world took part, a declaration on the entry into force of the UN convention on the prohibition of nuclear tests was adopted.

Andorra reaffirmed its commitment for the prohibition of nuclear tests.