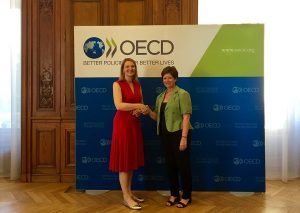 Andorra ratified an agreement on mutual administrative assistance in tax matters in cooperation with the Organisation for Economic Cooperation and Development (OECD). The announcement was made following the meeting of the ambassador of Andorra in France Cristina Rodríguez with the deputy general secretary of the OECD Mari Kiviniemi on 25th August in Paris.

Therefore, Andorra confirmed its international obligations to combat tax fraud and has made another step towards applying OECD rules on exchange of financial information.

Andorra signed the corresponding agreement in Strasbourg on 5 November 2013. In December 2015, a multilateral agreement between the competent authorities on the issue of automatic exchange of financial account information was signed.

The agreement will enter into force on 1 December 2016. The document enforces the exchange of information on request, as well as spontaneous and automatic information exchange.

Currently, 103 States are parties to the agreement.