Andorra and Iran discussed the prospects of trade cooperation between 2 countries • All PYRENEES · France, Spain, Andorra 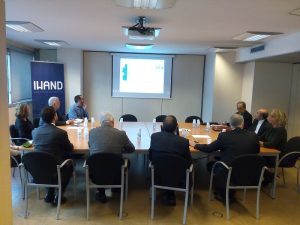 On 4th November Andorran businessmen held a meeting with Iranian delegation headed by Iran’s Ambassador to Spain and Andorra, Sr. D. Mohammad Hassan Fadaifard and first counselor of the Embassy of Iran D. Ardeshir Ghahremani Choubeh. The members of the meeting discussed the prospects of trade cooperation between Andorra and Iran.

During the meeting, the Iranian ambassador said that the country was currently in a period of economic and social stabilization and ready for international cooperation. In particular, he mentioned the establishment of relationships in the financial sector with a number of European countries, including Spain, Germany and Italy.

Businessmen of Andorra noted the competitive advantage of Andorra due to its convenient location between the two countries – Spain and France, which is an important factor for international investors.

Following the meeting, it was decided to develop joint recommendations on cooperation in the areas of tourism, trade, hotel business and finance.

The next meeting is scheduled for the spring of 2017 year.