Andorra and Iceland discussed the cooperation of Andorra with the European Free Trade Association (EFTA) • All PYRENEES · France, Spain, Andorra 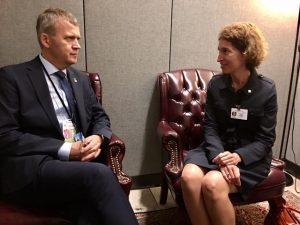 Andorran FM Maria Ubach and the State Secretary for Foreign Affairs of Iceland Stefan Haukur Johannesson, met to discuss the cooperation of Andorra with the European Free Trade Association (EFTA). Andorra intends to use the experience of this organization in establishing the legal framework for an association agreement with the European Union. The meeting was held at the UN headquarters in New York.

Both leaders discussed the status of Andorra’s negotiations with the EU.

The European Free Trade Association unites European states that are not members of the European Economic Community (including Iceland, Norway, Switzerland and Liechtenstein).

During the week, the delegation of Andorra, headed by Maria Ubach, plans to hold series of meetings with representatives of the EFTA member countries.

As Andorran Government reports, Maria Ubah participates in various high-level events within the framework of the United Nations General Assembly. Among them – the meetings dedicated to the effects of Hurricane Irma. In particular, the Minister stated that, “together with the French-speaking countries, Andorra intends to contribute to the support of the victims of this catastrophe”.