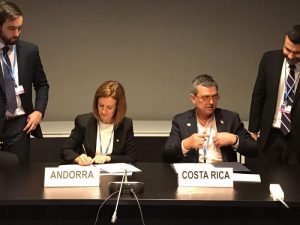 UN Climate Conference in Marrakech will run until 18 November.

The agreement will allow both countries to share experiences in areas such as reducing greenhouse gas emissions, global warming and nature conservation policy.

The signing of the agreement is dedicated to the 20th anniversary of establishing diplomatic relations between the two countries.