Andorra and Colombia started negotiations on agreement on the exclusion of double taxation between 2 countries • All PYRENEES · France, Spain, Andorra 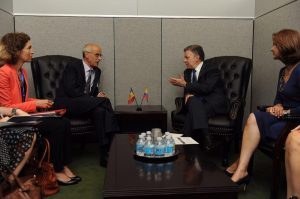 Andorra and Colombia started negotiations on agreement on the exclusion of double taxation between 2 countries, reported Andorran government after the meeting between the President of Colombia Juan Manuel Santos with the head of the government of Andorra Antoni Marti, held at the UN headquarters in the framework of participation in the meeting of the 72nd General Assembly.

Anthony Marti expressed his willingness to sign the corresponding agreement with Colombia, “which is one of the most dynamically developing Latin American countries, “- reports the Government of Andorra in the official statement.

The Ministers of Foreign Affairs of Andorra and Colombia, Maria Ubach and Maria Ángeles Holguín, who attended the meeting, confirmed the warm and friendly relations between the countries.

The head of the government of Andorra also invited the President of Colombia to visit Andorra before the end of his term, which expires in May 2018.