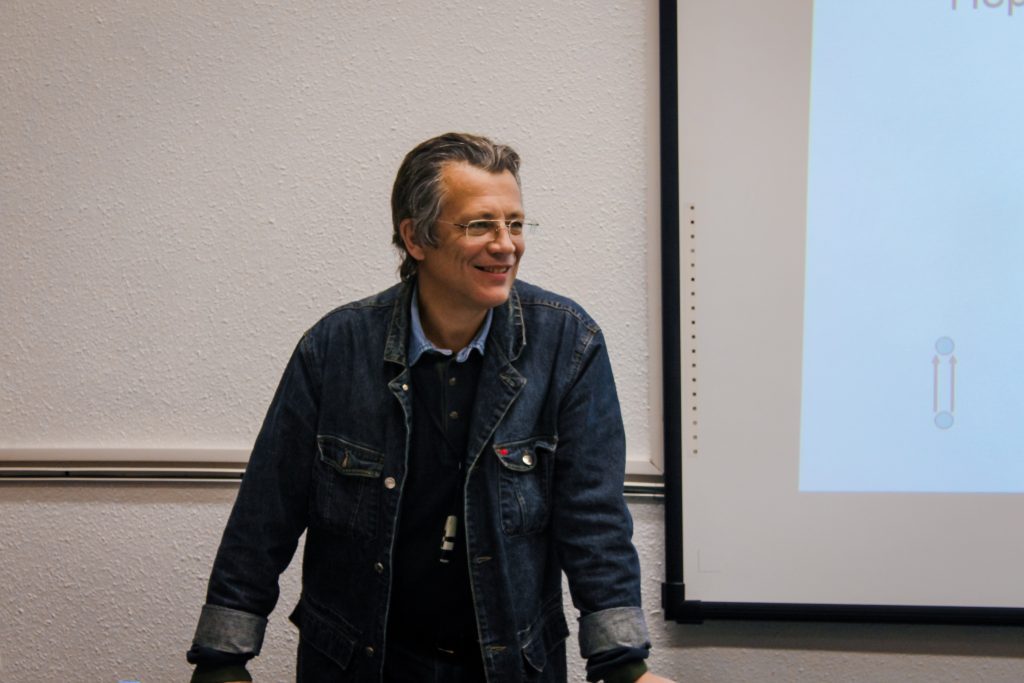 He believes that the formulation and the proof of the theorem about the presentation of the invariant measure of an irreducible Markov process by tree graphs is the most important scientific achievement to date (2015).

Today we talk with Alexey on the topics of quantum gravity and the information universe:

Various sciences study the separate parts of the universe: chemistry – substances, biology – living organisms and their communities, and only the fundamental directions of theoretical physics explore the subject of the whole universe.

Science is part of civilization, and since presentation of the universe correspond to its era.

In the eighteenth century, the most advanced technology was the precise mechanics, and the universe was viewed as a mechanical machine controlled by the laws of Newton classical mechanics. Figuratively speaking such a universe could be represented as a huge, accurate Swiss watch, in which planets are going in circles on their orbits in the manner of huge gears. Everything was considered to be strictly defined, which was termed the Laplace’s determinism by the name of the great French scholar, Pierre Simon de Laplace.

The nineteenth century becomes the century of steam machines. The study of their work has led to the creation of thermodynamics. Of course, these new views were applied to the universe description; it has become represented as the huge thermal machine, which inevitably goes to the state of equilibrium, that is the heat death of the universe.

That is not to say that the new ideas mean fallacy of the old ones. Planets rotate according to the laws of mechanics.

These laws are true, one cannot cancel them, only clarify and supplement. Thermodynamics complemented the mechanics. We have learned to look at the universe under a new angle, and our view became more voluminous. Albert Einstein refined the Newtonian mechanics already in the 20th century in relativity theory.

Computers were created in the 20th century, and in the 1960s the concept of the information universe appeared, where its represented as a giant computer.

These views are not completely new. Even in antiquity, Pythagoreans believed that all is number; Plato believed that the real world is the world of ideas, and our world is only its shadow. Later Bishop Berkeley represented the world as an idea, a vision in the consciousness of God. In the nineteenth century, Hegel, in his philosophical system, saw the world as the self-development of an abstract idea. It can be said that each of these thinkers expressed the idea that there is a world of information system.

“Information system” is only a modern terminology, thinkers of the past have already expressed this idea in terms and representations of their eras. The idea is not new. However, now science is ready not just to express this idea, but to investigate and bring it to practical results. Modern information technology played a huge role in this.

As far as I understand the information implies the existence of a subject, in some ways it can be called the bioinformation, because without the live observer, it loses its meaning.

The whole scientific community accepts the need to account for the information side of the universe. The main discoveries have not been made yet, they are ahead. Therefore, there are different points of view on the role of information in the universe.

According to the most radical point of view, information is the basis of everything. Everything consists of information. A striking proponent of this point of view was a remarkable scholar John Archibald Wheeler. He expressed it in the apt remark “it from bit”. I adhere to this point of view and I have been working in this area of science for more than thirty years.

What are the latest achievements of the scientific community in the theory of the “information universe”?

In my opinion, the information theory of the universe will be created in the next ten years. I would even made a bet on it. Though perhaps I am simply incorrigible optimist.

Creating theory is like assembling puzzle pieces. The difference is that in this puzzle one must first make the pieces. I think that we have already built most of the pieces in information theory of the universe, and some parts have already been assembled. These parts are the methods of computer modeling, as well as such sections of mathematics as the theory of partially ordered sets, graph theory, the theory of Markov processes. Moreover, these sections must be completed, for example, to formulate and prove new theorems. I am afraid that these names say little to many readers. This is a hard laborious work, the technical details of which are of interest only to specialists.

As a result, we will be able to understand how not only the smallest particles of matter, but also the space and even time are constructed from bits.

What you say, resembles the movie “The Matrix”.

Yes, of course. Only there was the real world outside the matrix in the movie. According to the Wheeler hypothesis, the real world is the matrix. Clearly, our world is a huge computer game in which we are not players, but characters. The current task of fundamental theoretical physics is to calculate the algorithm of this game.

There is no computer from my point of view. The universe is the information structure, which exists in itself. Otherwise, there is the paradox of an infinite number of worlds, nested within each other. The computer that is running the simulation, which is our universe, is a part of its universe. This universe, in turn, is a simulation on a computer. And so on to infinity.

On the other hand, any simulation can be run on any computer, which is a universal Turing machine with sufficient memory. One cannot determine from the inside of the simulation at which hardware this simulation is performed.

A question that is fundamentally impossible to answer makes no sense. The only loophole are the failures. If the computer is not working perfectly, then by studying the failures in the implementation of simulation one can investigate the properties of the computer, at least, to determine its existence. This is not a question for the coming decades, rather a very distant prospect.

Together we demonstrated the computer simulation of partially ordered sets for the quantum gravity modelling at the Foundations of Probability and Physics Conference in 2011. What are your comments on these studies?

Historically, the entire scientific direction of research of the most profound level of the universe structure was called “quantum gravity”. In the animation clip, dots depict the basic events, and the lines their cause-effect relationships. A certain algorithm adds the elementary events one by one, forming a process. The process is largely random, but one can see that there is the denser flow of events in the middle and more friable events cloud around. It is roughly similar to modern ideas about the movement of elementary particles.

I have greatly improved the algorithms since then. Now they form a network of interacting particles. The clip reflects my view of the microcosm as an illustration. There must be an algorithm, which generates elementary particles and from them everything else in the universe.

Suppose such a theory is created, but only specialists understand it. What will it give to other people, who are far from science?

The universe algorithm discovery is, of course, another scientific revolution.

A revolution in science leads to new technologies. The revolution in physics in the first half of the twentieth century and the creation of quantum mechanics, led to nuclear technologies, modern chips, and superconductors. It is not fast. Half a century has elapsed from the atomic nucleus discovery to a nuclear bomb creation.

Can you tell us more about the alleged technologies of the seventh technological order.

The world of the seventh technological mode will be the epitome of the fairy tales in our view. This is not surprising. Tales gradually come true. Let us recall the evil queen, the Snow White stepmother. She had a magic mirror, which responded to the questions and had shown pictures. This mirror was magic until our days, and now it is simply a smartphone with voice control, on which the wicked queen used Google to ask questions. And like this future fabulous technologies, having become technologies, will no longer be magic, and will become the usual routine work, taught in college.

We regularly give orders in current life, and they are executed, but only by some objects. Like people, some animals, for example your dog and some machines. Other objects ignore the orders. And why? The modern response is: an order can only be executed by an object possessing a complex information system. Such as the human brain, dog brain, or computer control system of the machine. Most of the objects of the surrounding world do not have complex information system, they can’t understand and execute orders. But from the point of view of the universe information theory, this is not the case! Everything consists of a huge number of bits, meaning, everything is a complex information systems, even the smallest grains of sand on the beach. We just need to learn how to communicate with them, give orders to them. For this purpose, it is necessary to fulfill three conditions.

The first. The recipient must be capable to execute the order. It is pointless to order a man to jump to the Moon.

The second. The order must be in a physical way, that can be perceived by the recipient. It is pointless to give an order to a person using radio waves or ultrasound, as well as in such a quiet whisper that he can’t hear.

The third. The order must be in a language understandable by the recipient. It is pointless to give an order to a person in Chinese, if he does not know the Chinese language.

Mathematics is the tool for learning these languages. Mathematics is the magic of the future world. One can imagine the normal announcement of the year 2100: “Calculation of magic spells for individual orders. While ordering the three spells the fourth is for free.”

Thank you for an interesting conversation. Let’s hope you are right, and that we will live in the fascinating world of industrial magic. 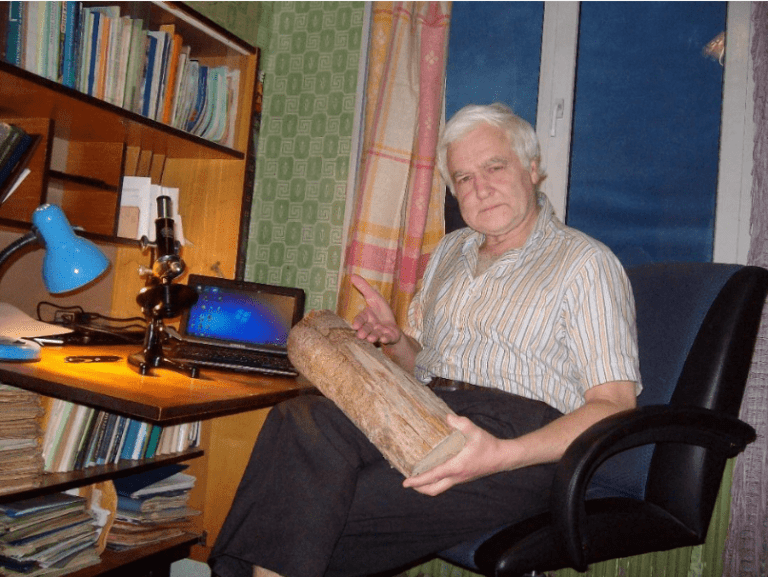