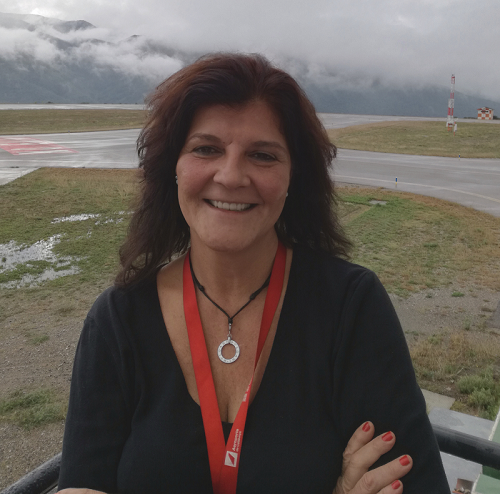 The director of the airport Andorra – La Seu d’Urgell Cristina Pastor told all-andorra.com about the airport’s plans and services:

Could you please tell about the history of the airport?

The airport Pyrenees La Seu d’Urgell is located in the municipalities of Montferrer Castellbó and Ribera d’Urgellet (Alt Urgell). The construction of this infrastructure, which currently operates as a public and commercial airfield, was driven by a particular entrepreneur Joseph Betriu, who believed that the construction of an airport could be viable given its’ proximity to Andorra.

It was opened in 1982 as an airport with a runway of 1,267 meters, providing commercial flights between Barcelona and Alt Urgell by the airline AVIACO. There were flights from 1982 to 1984. Technical problems due to unfavourable weather conditions and a lack of passengers, alongside the improvement of road communications between Catalonia and Andorra triggered the airports’ closure. After this point the hangar was used only for aviation sports and helicopter flights.

In 2007 the Catalan Government bought the facility for 8 million euros and then closed the site for safety reasons. The company Aeroports de Catalunya, promoted by the Catalan Government and attached to the ministry of Land and Sustainability, began investing in the site in order to rehabilitate the airport to open it as a private airfield. In 2010 that’s what the facility became.

In January 2015 the airport started working as a commercial airport. From that date the airport could operate private aircrafts and also larger aircraft carrying up to 40 passengers.

The airport can also receive corporate and executive aviation and/or aero taxis to transport passengers privately, saving time and allowing the flexibility that falls outside of standard aviation services regulations. As for commodities, the airport can ensure a faster delivery service in an area that previously could only be accessed by road.

In order to accommodate passengers from outside the Schengen area, Aeroports de Catalunya has initiated procedures with the Ministry of Interior and other agencies involved with the aim of installing a border inspection point. All requirements to handle non-Schengen flights are already in place.

How do Catalonia, Spain and Andorra share the responsibility for the airport’s management? Who gives authorization for flights?

The airport is managed by the Catalan Government through Aeroports de Catalunya and the Government of Andorra. Aeroports de Catalunya is in charge of the technical and development management. Aeroport de Catalunya control airport’ operations; technical and meteorological data; fuel installations; managing operational flights, safety and security at the airport. We also attend international trade shows and hold meetings with different airline companies to promote the airport.

Andorra is in charge of the commercial side of things – meaning the airport’s promotion, attending international trade shows and meeting with tour operators as well as the tourism industry in general.

As I have already said, we have permission for Schengen flights, but not for flights from non-Schengen countries. It means that flights from France, Austria, Belgium, the Czech Republic, Denmark, Estonia, Finland, etc. can arrive and depart from the airport, but not flights from England or Ireland, for example.

So, we have requested the authorization to allow non-Schengen flights to operate at the airport from the Spanish Government and we are currently waiting for their permission. It is important to say, that the airport already has all the necessary infrastructure to support these.

As far as I know, the total budget given to the airport maintenance services is 700 000€ a year. Who finances these activities?

The total investment needed for making the airport into a commercial one was 1 million euros. This covered: implementing the AFIS (Tower information service), providing the necessary rescue and fire-fighting equipment and procedures, investing in security equipment (metal security scanners and others), safety measures studies connected to the AFIS service and installing an automated aviation weather station to provide information to pilots. This investment has come only from the Catalan Government.

Andorra has been paying half the costs of the management, since the beginning of 2015, when the airport was opened for commercial and agreement was signed with the Catalan Government.

At the beginning of this year the Andorran minister of Tourism Francesc Camp said that the airport needed new equipment – the readiness of airlines to offer commercial flights depends directly on it. What kind of equipment is it? Who are the suppliers?

Due to the orography of the airport area it needs two different systems. Firstly, it needs the NDB-DME (allowing it to fly under meteorological conditions that would make it impossible otherwise), and secondly, an EGNOS (system for GPS satellite signal). We are calculating the cost of the first stage. The second stage creates no additional costs for the airport.

What kind of planes can the airport accept after the modernisation? Is it possible to accept an Airbus 320 for example?

We are expecting our standard planes to be ATR 42s with 45/50 passenger capacity per flight. The largest helicopter allowed is the Bell 412.

What is the length of the runway?

What are the main geographical and administrative factors about the airport?

Which companies are interested in launching regular flights? What kind of aircrafts do they operate? What are the expected tariffs?

We constantly are in conversations with different companies, encouraging them to come to Andorra-La Seu d’Urgell airport. This is a part of the management work. The airport charges are public and can be consulted on the airport web site.

In 2015 the company El Teu Soci Aeri (TSA) offered an air taxi service from the airport. Is this service still active? Which cities can use this service?

Yes, it is operative. The taxi services works all year round to different European destinations, depending on the demand.

Do you plan to have commercial cargo transportation services?

We do not have cargo facilities in this airport and we don’t have this planned for the near future. It could be consider in a long term.

What are the expectations for private aviation development? What are the tariffs for maintaining the private jets?

The tariffs are for daily passes, overnight passes in case of general aviation and in case of commercial flights there are tariffs for landing and for passengers, depending on the type of aircraft (see our website). The airport doesn’t have any maintenance aircraft companies at the moment.

Moreover, we have two aviation schools: PF Centre and Escola de Vol La Plana (one for commercial pilots and one for ultralights) and also private companies that transport passengers.

The company Helitrans Pyrenees has its facility at the airport. Is it a private company? What kind of services does it provide?

The company is engaged in the transportation of all types of materials and equipment for construction. Other services include the installation of antennas, repeaters, lighting, electric towers, the construction of transmission lines, selective removal of trees and putting out fires from the air.

How many employees are involved in the management of the airport?

Can the airport provide a repair services for jets and helicopters?

A private company would have to decide to establish themselves at the airport. We would help them with everything but it should be a private company that offers this service.

Is it possible to get a license to operate drones at the airport?

The company PF Center is in charge of this kind of business. As you know, the use of UAVs or drones in various areas is regulated by “Royal Decree Law 8/2014,” and the “Law 18/2014”. In order to comply with these legal requirements Pyrenees Flight Center offers an advanced course of drones (RPAS), certified by AESA, which consists of 60 hours of theoretical training and 5 hours of practical flight individual. The instruction is carried out with a PHANTOM 3 professional.

To carry out professional photography and filming, the PF center also has a DJI INSPIRE 1.

Could you please give more details about the agreement between the Catalan government and Andorran government regarding public transport infrastructure (buses from the airport to Andorra)?

Are there any regular commercial flights planned for the 2016-2017 ski season? If there are, which airlines would provide this service? And from which cities and countries? What are the tariffs for these services?