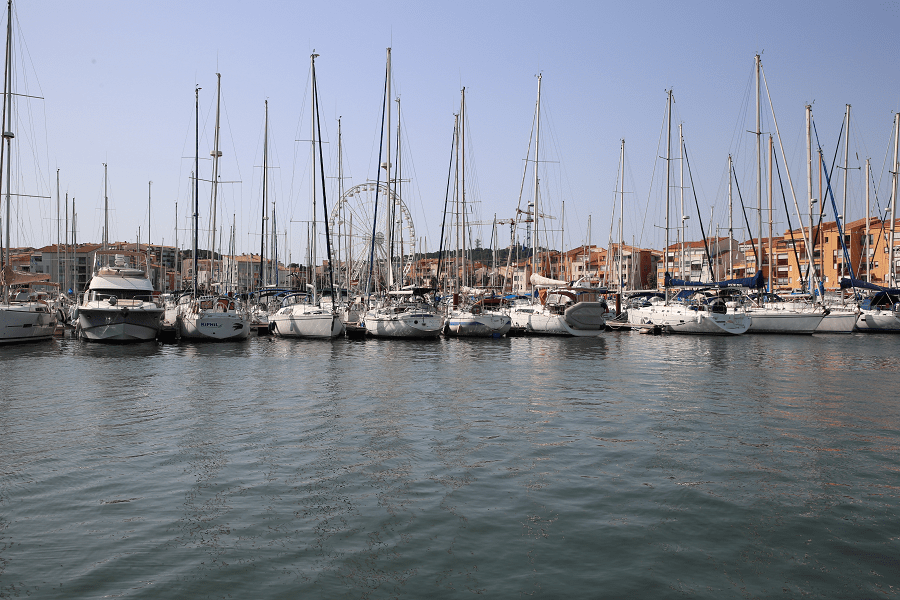 Agde (fr. Agde) is a commune in the Hérault department in southern France. It is the Mediterranean port of the Canal du Midi.

The city of Agde, sometimes nicknamed “the black pearl of the Mediterranean” because of its monuments built in basalt stone, has a long history. Populations are known from the end of the Bronze Age on the site of La Motte (tenth century BC). The Phoenicians are present in the sixth century BC. J. – C. and come from Massalia (Greek name of Marseilles in Antiquity). 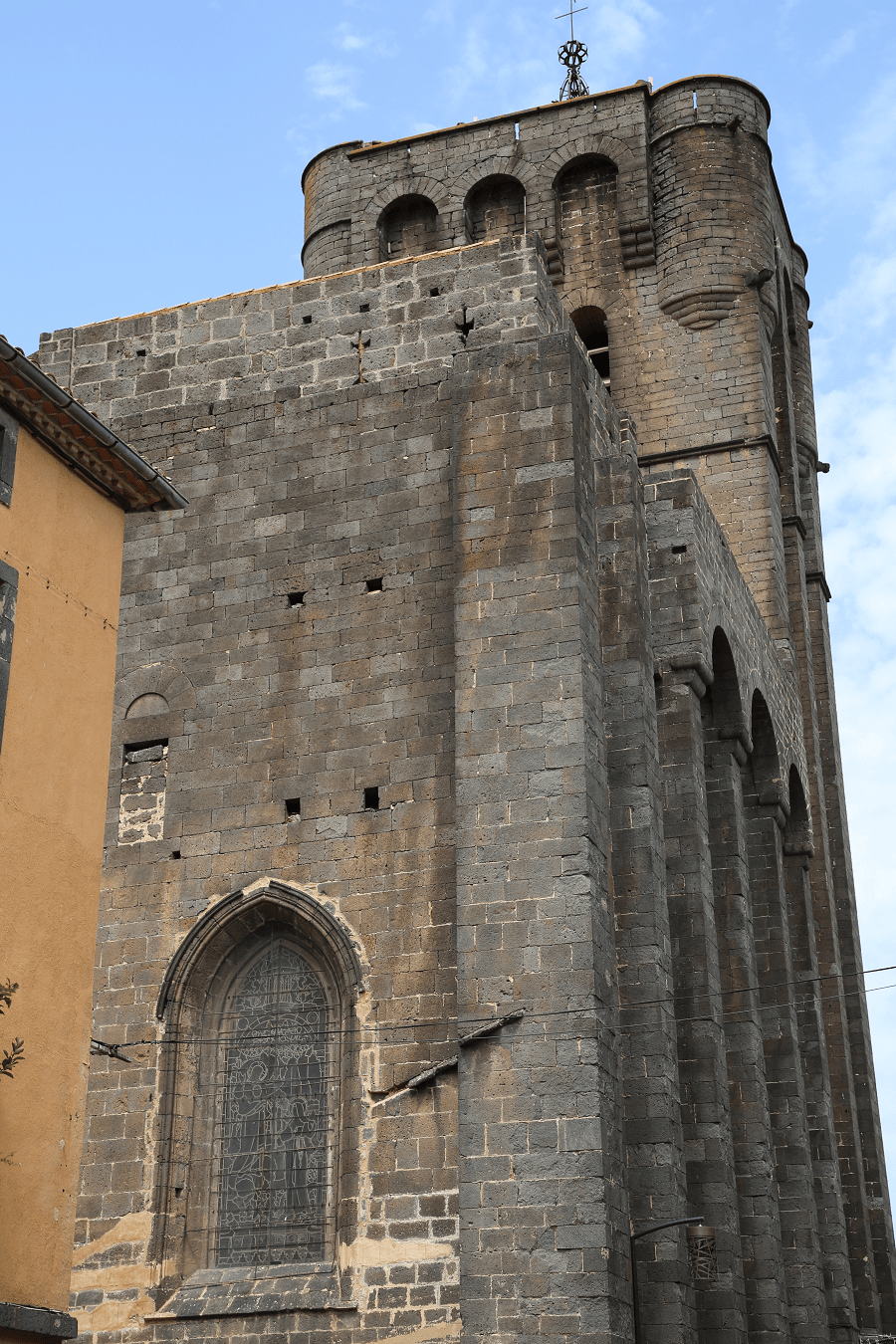 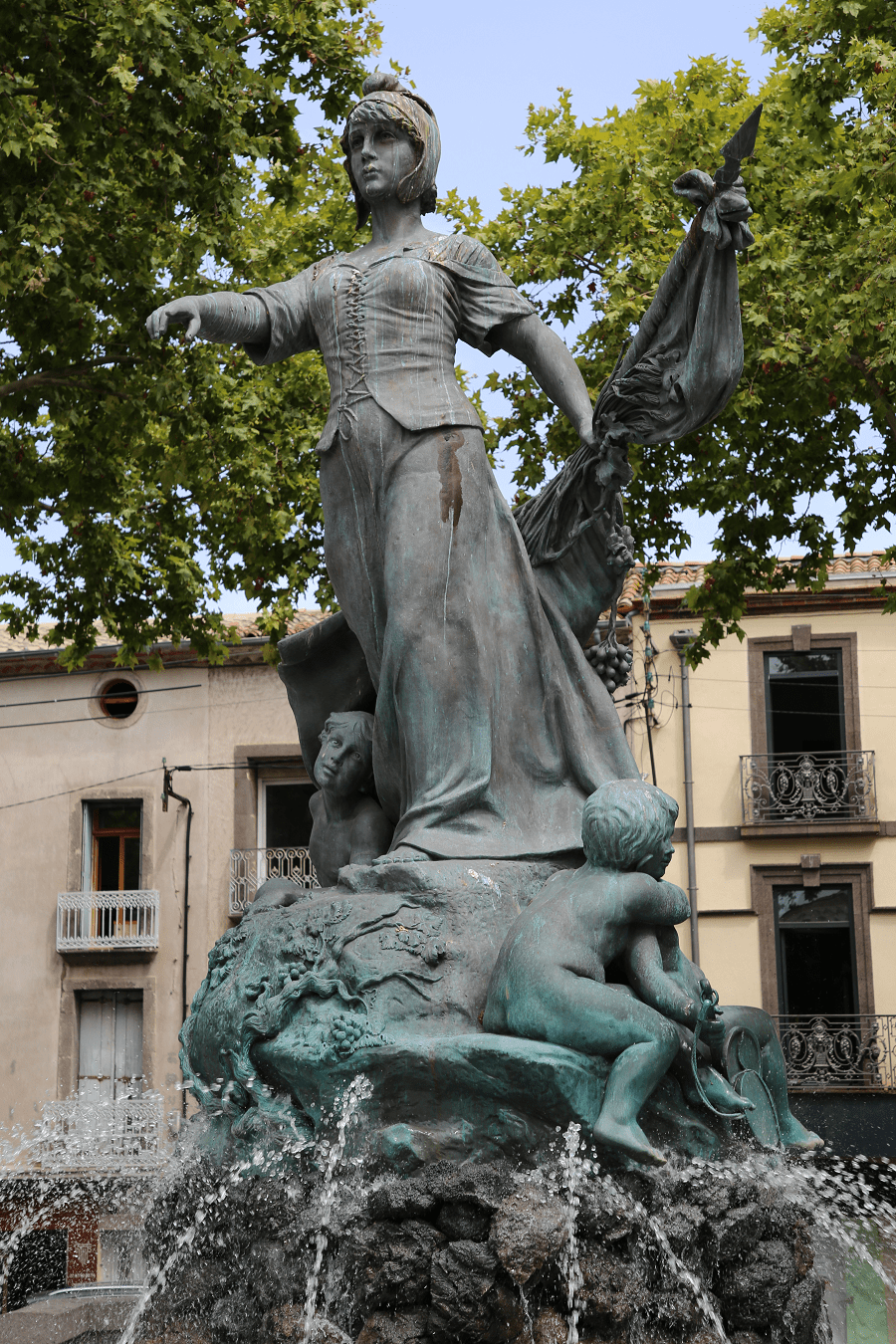 A port city since Antiquity, favoured towards the end of the seventeenth century by the opening of the Canal du Midi, Agde for a long time drew most of its income from maritime trade and fishing. The city suffered the decline of its port on the Hérault, five kilometres from the sea, outclassed by that of Sète upon the arrival of steamships. At the beginning of the twentieth century, the town thrived on fishing and agriculture (viticulture). 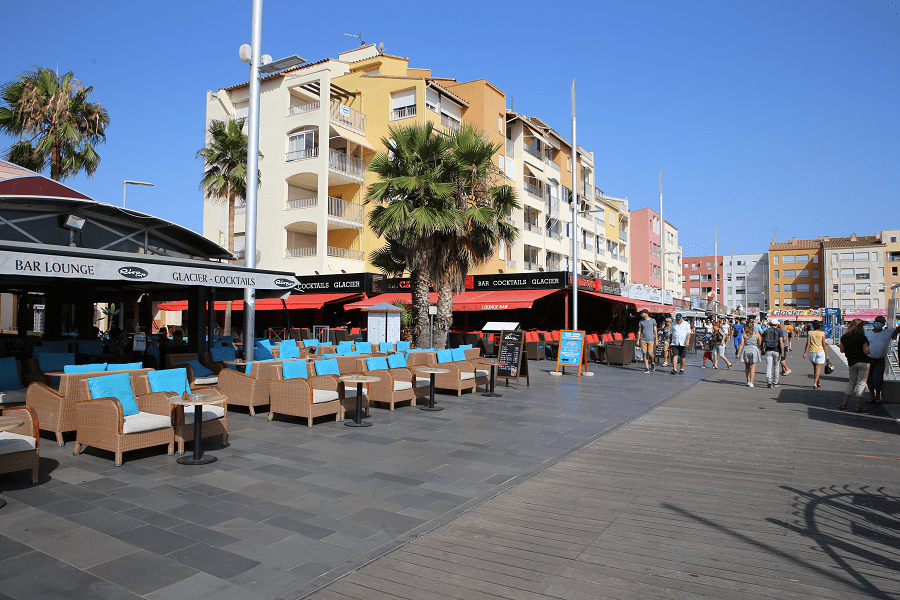 It has undergone a new phase of development since the construction, in the years 1970-1980, of the seaside resort of Cap d’Agde, as part of the tourist development of the Languedoc-Roussillon coast. It has become one of the main marinas in the Mediterranean, the leading tourist resort in Europe by its accommodation capacity, and enjoys international fame, in part due to its naturist district. 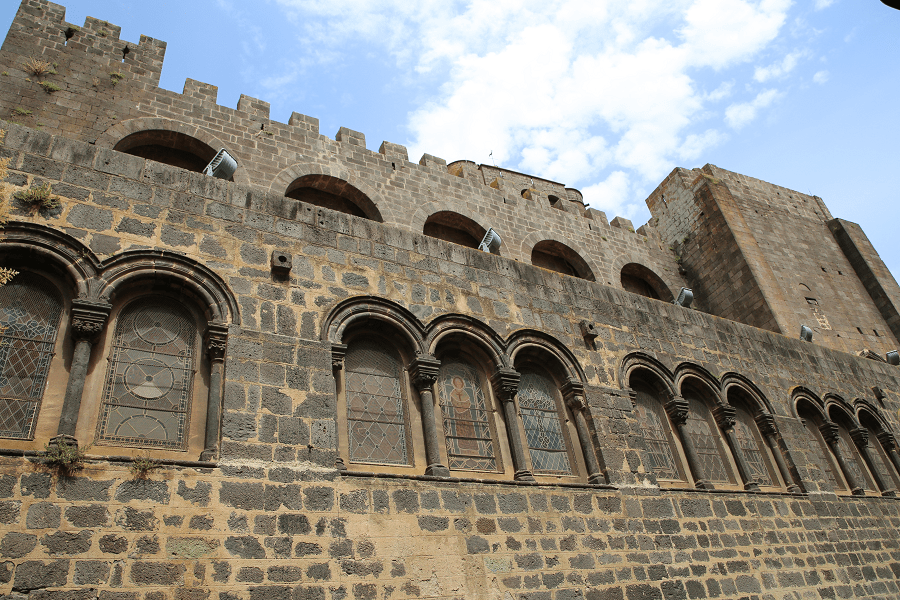 The town, however, suffers from a high unemployment rate and its economy is marked by the importance of seasonal jobs linked to summer tourism. If the city has about 30,000 permanent inhabitants in 2020, the population can reach 200,000 during the summer season, when it becomes the second city of Languedoc-Roussillon.

Cap d’Agde (fr. Cap d’Agde) is a seaside resort on France’s Mediterranean coast about 5 km from the centre of Agde (nine minutes by car). Cap d’Agde was planned by architect Jean Le Couteur as part of one of the largest state-run development schemes in French history. In the 1960s, the only buildings at the Cap were small houses that were typically used by locals over the weekends. It is now one of the largest leisure ports on the French Mediterranean. 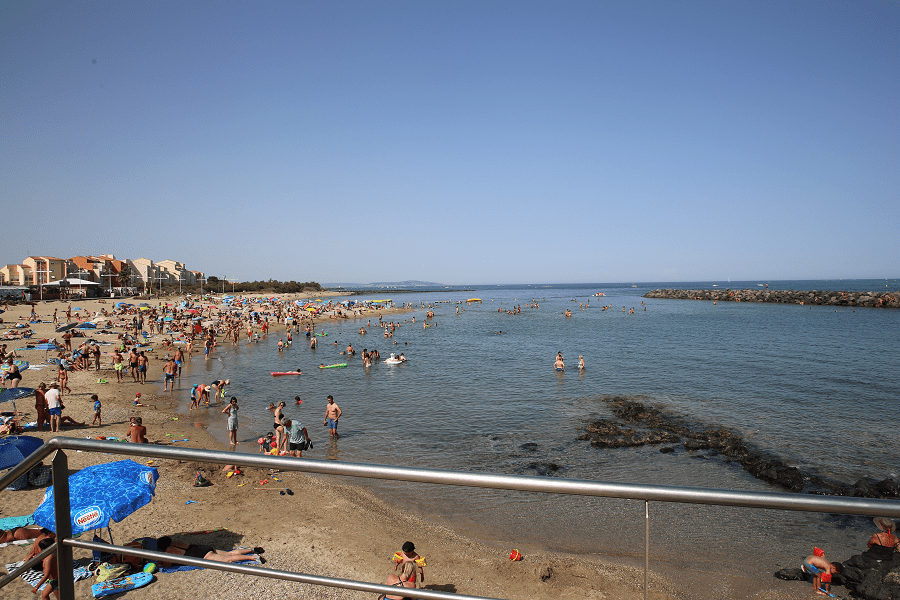 Agde is extremely committed to preserving its coasts and fighting against pollution. The European Blue Flag flies over ten Agde beaches and guarantees high quality water for swimmers. Regular checks of water quality, projects to protect the marine environment and dunes and frequent beach cleaning are just some of the actions undertaken to preserve this natural heritage. 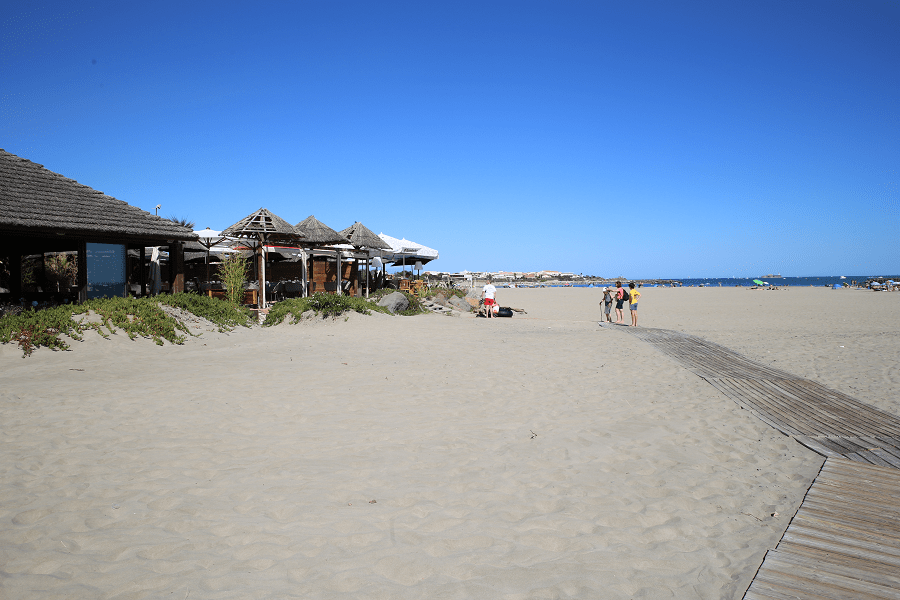 Cap d’Agde has a large family-style naturist resort. The Village Naturiste is a large fenced-off part at the north-eastern edge of Cap d’Agde, although it is accessible along the public beach from the east. It is a self-contained town (sometimes referred to as the “Naked City”), where nudity is legal and common in the whole resort. 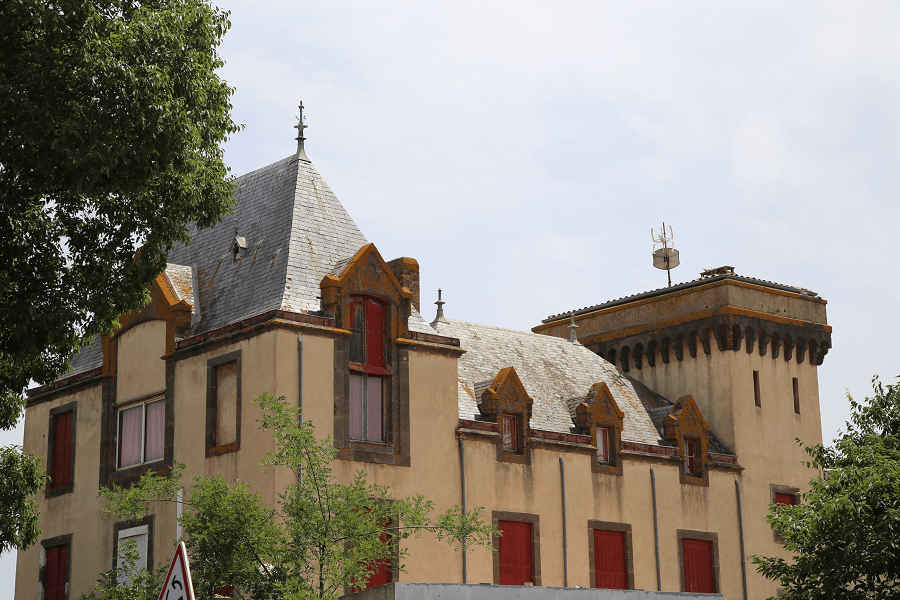 Saint-Etienne cathedral, listed as a historic monument in 1840187, is the city’s main monument. It is a very austere Romanesque fortified church, built in the twelfth century, entirely in black basalt lava. The bell tower, in the form of a keep, 35 meters high, dates from the fourteenth century. It was consecrated a cathedral in 1453. It contains an altarpiece in Caunes marble from the eighteenth century placed behind the high altar and a pulpit in marble also from the eighteenth century, both listed in 1840. The bishops of Agde as well as the privateer Claude Terrisse were buried there. 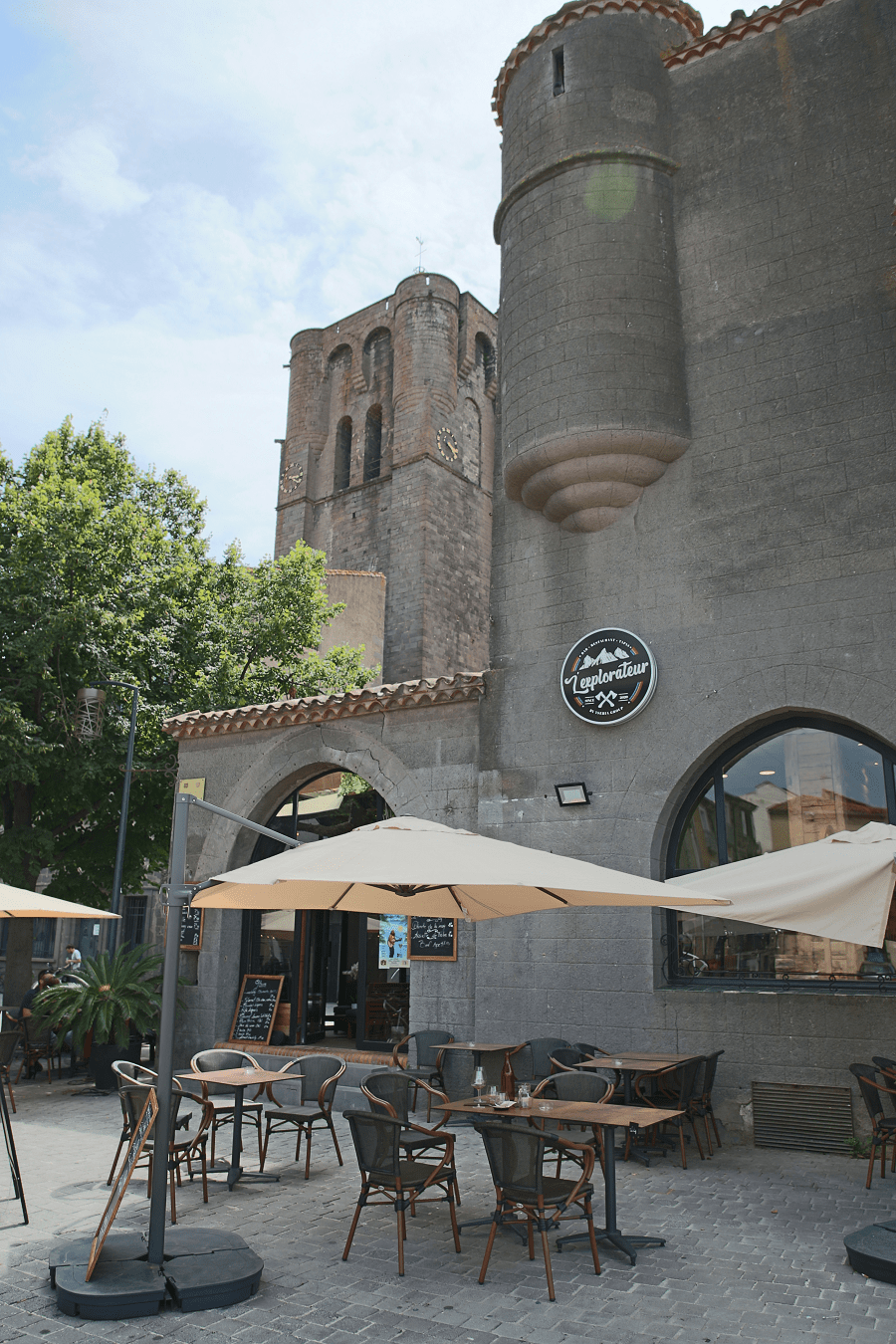 The Saint-André church, listed as a historic monument in 1984, built in the fifth century, has since been profoundly altered. It was the seat of the Council of Agde in 506.

The Saint-Sever church, known as the fishermen’s church, is in the southern Gothic style. It was built in 1499 on the site of a Romanesque church, some elements of which are still visible. This church was restored and greatly modified in 1953 following the collapse of the vault in 1922. It contains a statue of the Holy Christ in polychrome wood dating from the sixteenth century, classified as an object in 1911. 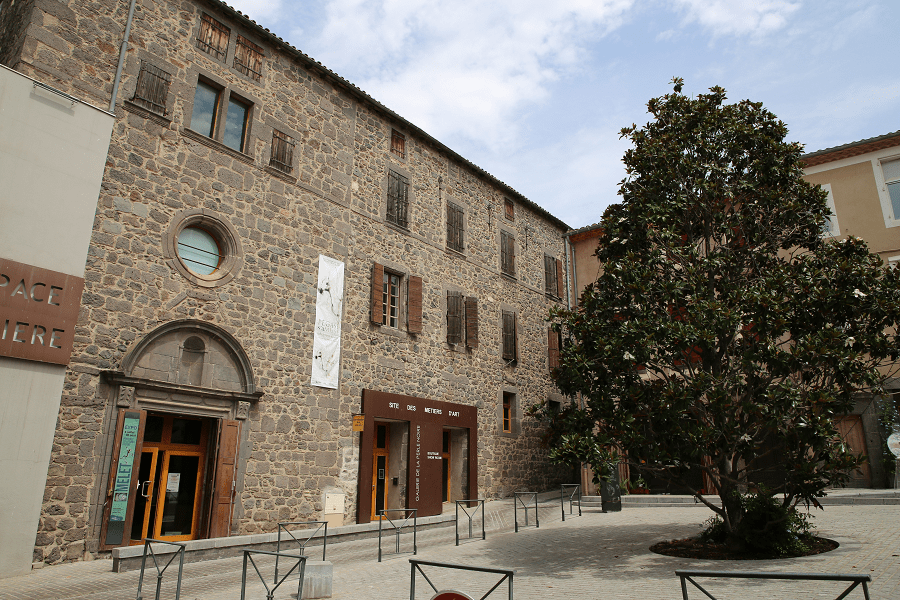 The Notre-Dame-du-Grau church is in Grau-d’Agde, near the banks of the Hérault, two kilometers south of Agde. It was built in 1584, as well as a Capuchin convent, by Constable Henry I of Montmorency by enlarging an old chapel from the fifth century. 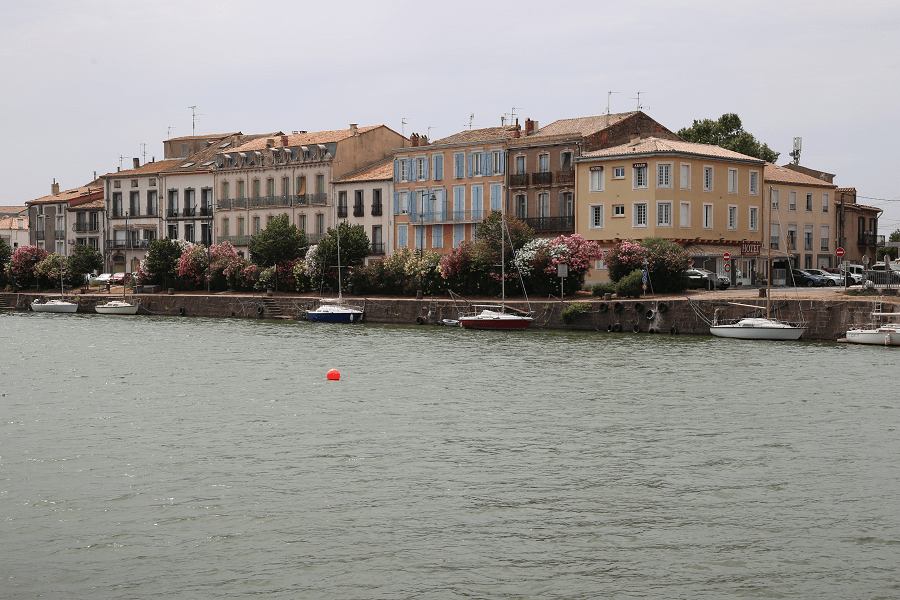 The chapel of Agenouillade, also in Grau-d’Agde, near the previous one, was also built by the constable of Montmorency. This small chapel shelters a rock which, according to legend, bears the mark of the knees of the Virgin whose kneeling appearance would have made reverse the waves which threatened the city in the fifth century. It houses a statue of the Virgin and Child in white marble classified as an historical object in 2001. 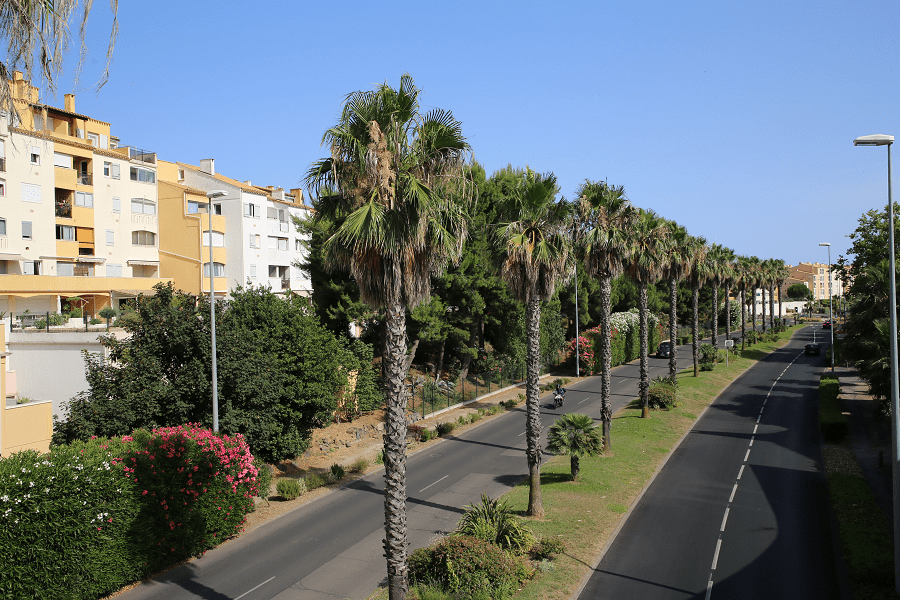 Several other religious buildings have been abandoned or destroyed. Located on Place Molière, two chapels of the former Notre-Dame convent built around 1630, whose nuns were driven out during the Revolution, first converted into barracks for the army, have since experienced various vicissitudes: the large chapel, restored in 1983, became a municipal exhibition hall (the “Espace Molière”), while the small adjacent chapel housed until 2008 the tourist office. The chapel of the school of the Ladies of the Nativity, transformed by the municipality into a girls’ school (Anatole France school), also serves as an exhibition hall; it was built in 1883 in a neo-gothic style. The old chapel of the Canal du Midi, built in 1773 near the Riquet hotel, is a private house today. 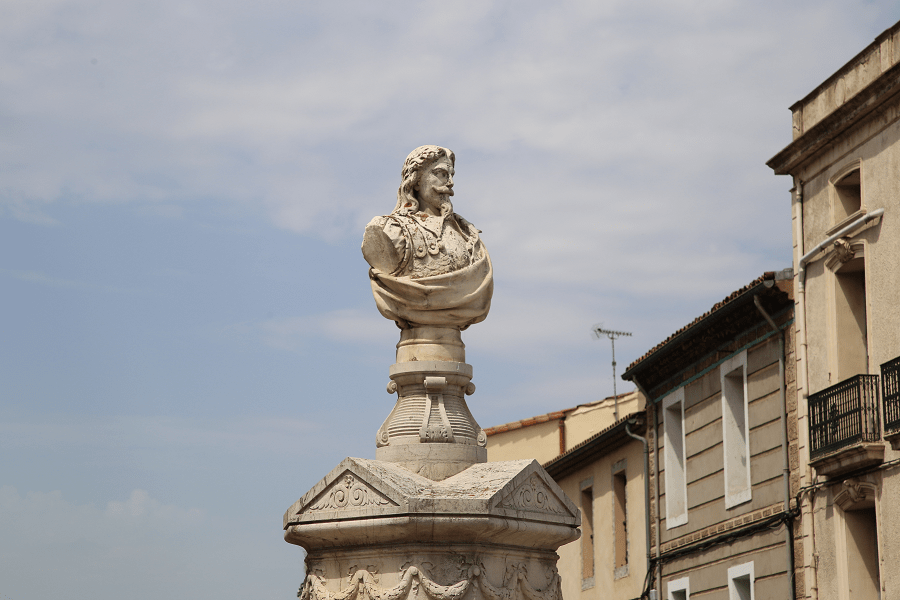 There are two museums in Agde:

The Jules Baudou Agathois Museum is a municipal museum of popular arts and traditions, created in 1932. It was labeled Musée de France in 2002;

The Musée de l’Éphèbe, an underwater archeology museum (Le Cap-d’Agde), inaugurated in 1985, was built to accommodate and present to the public the Éphèbe d’Agde. The museum presents the result of nearly 60 years of archaeological discoveries in the river, the sea and the lake of Thau. 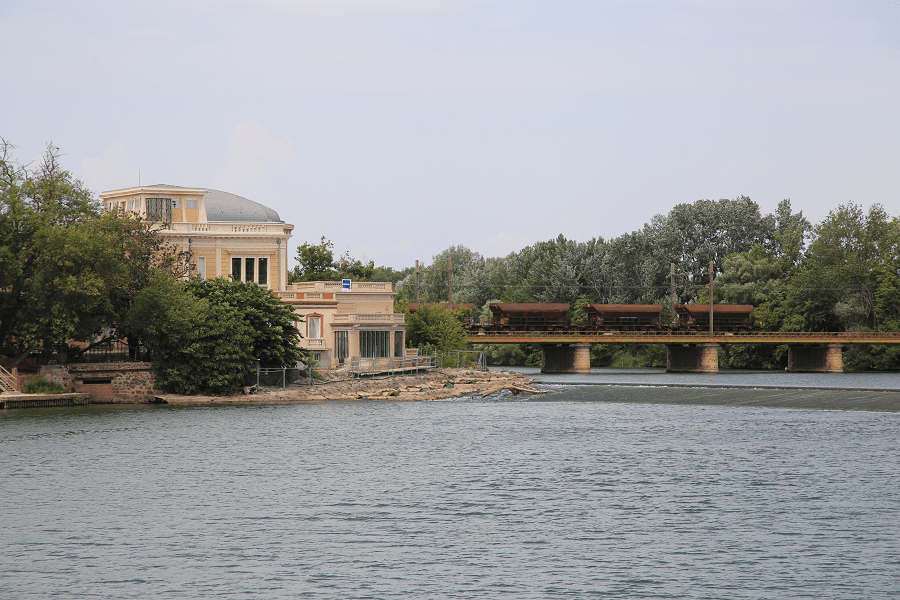 Aquarium Marin du Cap d’Agde is also one of the most interesting attractions of the resort. 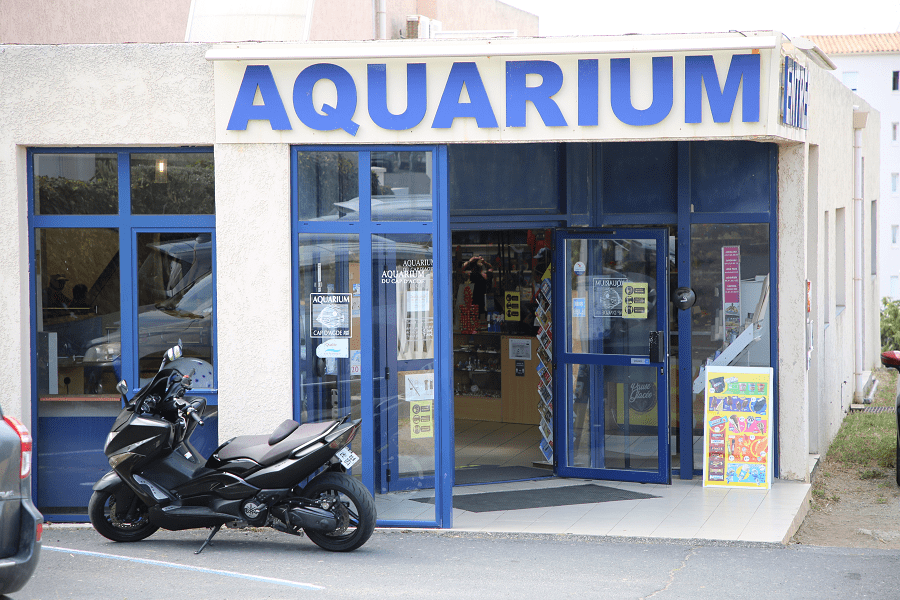 A very large amusement park with more than 80 attractions located on more than 7 hectares. Created in 1985. 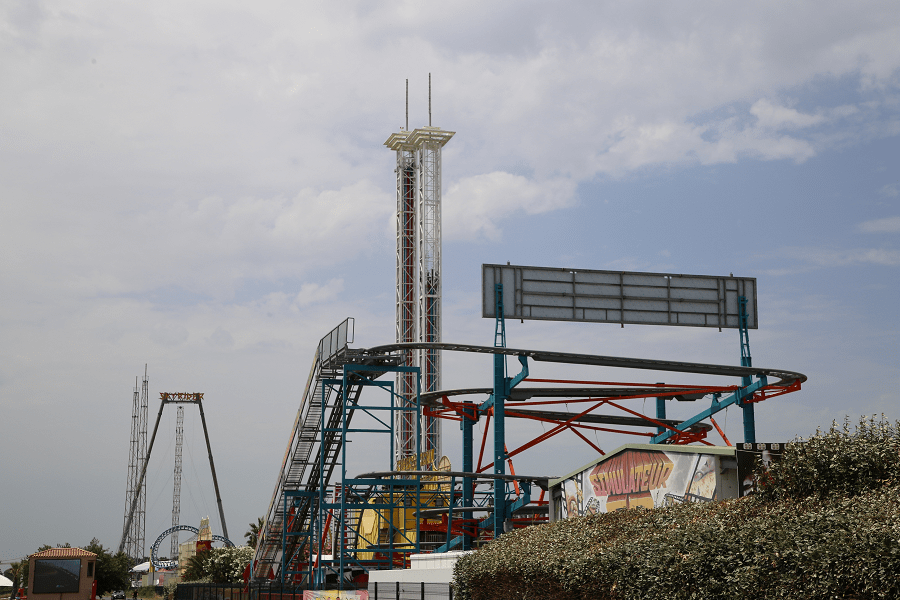 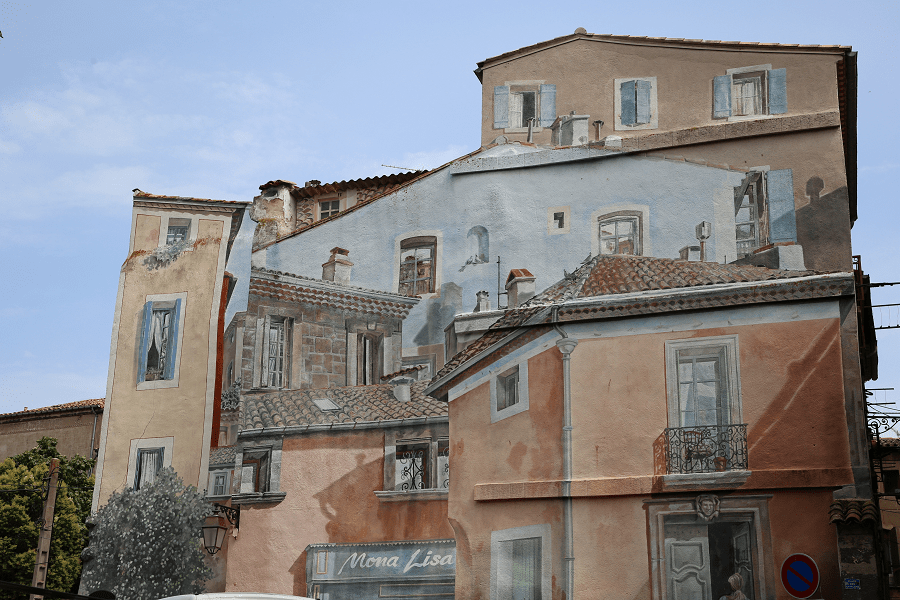 Traditional Agathoise cuisine is essentially based on fish, with recipes such as monkfish with agathoise, bourride with agathoise… It was illustrated by chef Nicolas Albano (1938-2005) who officiated at the hotel-restaurant “La Tamarissière”, in a place of the same name, which he managed between 1976 and 2004. 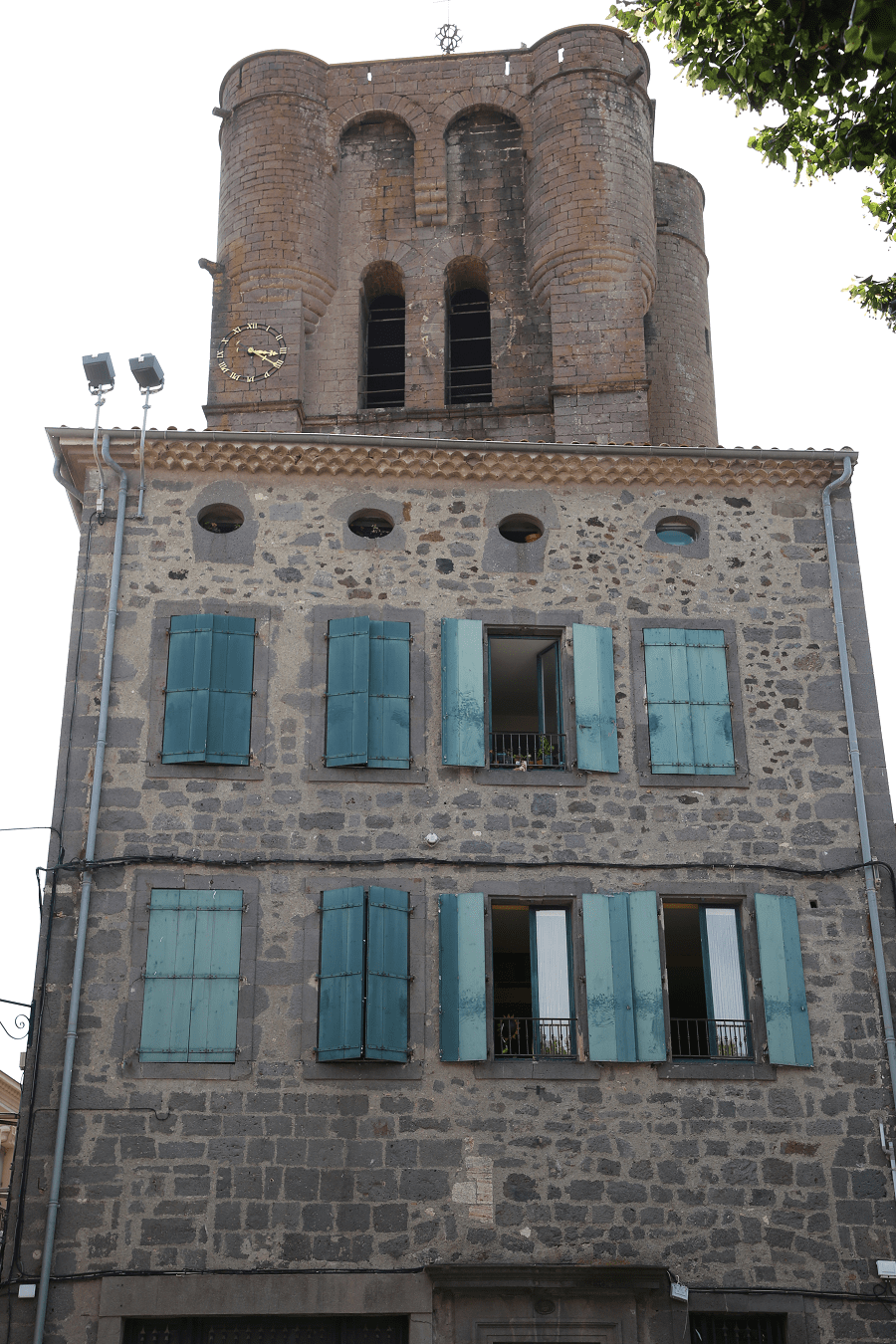 Main shopping in Agde is concentrated in the streets of Cap d’Agde. The main hypermarket is outside the resort, direction A9 to the Hyper U shopping Center at Agde. 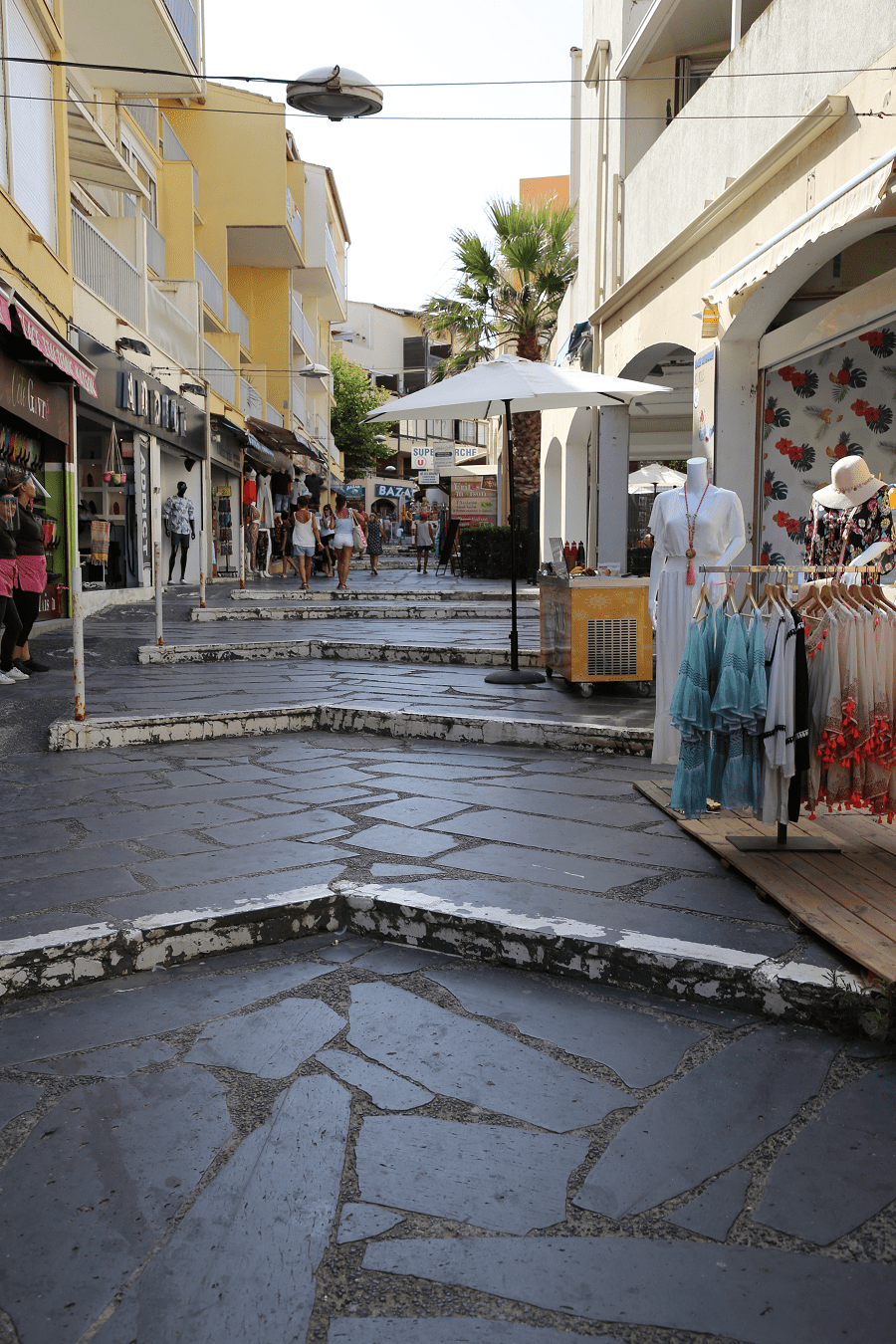 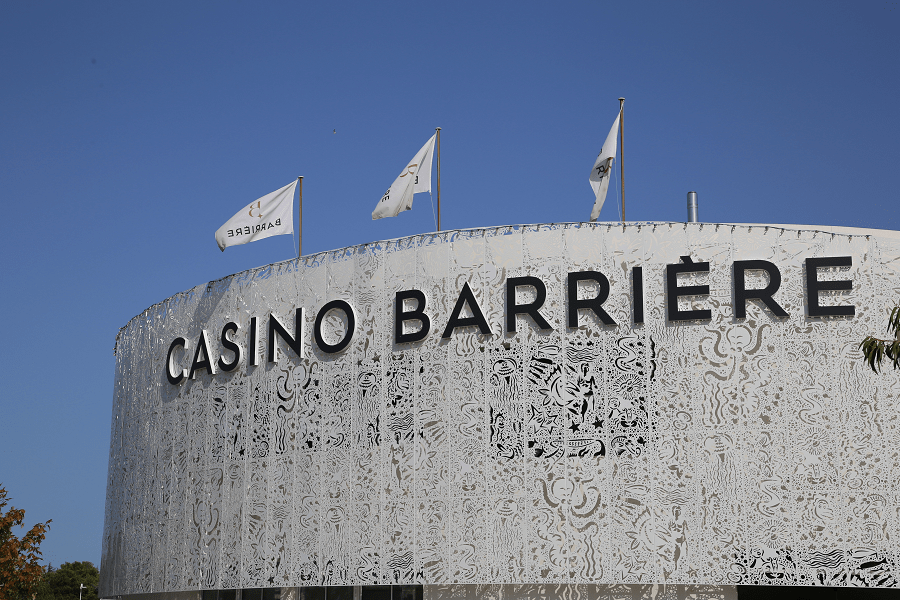 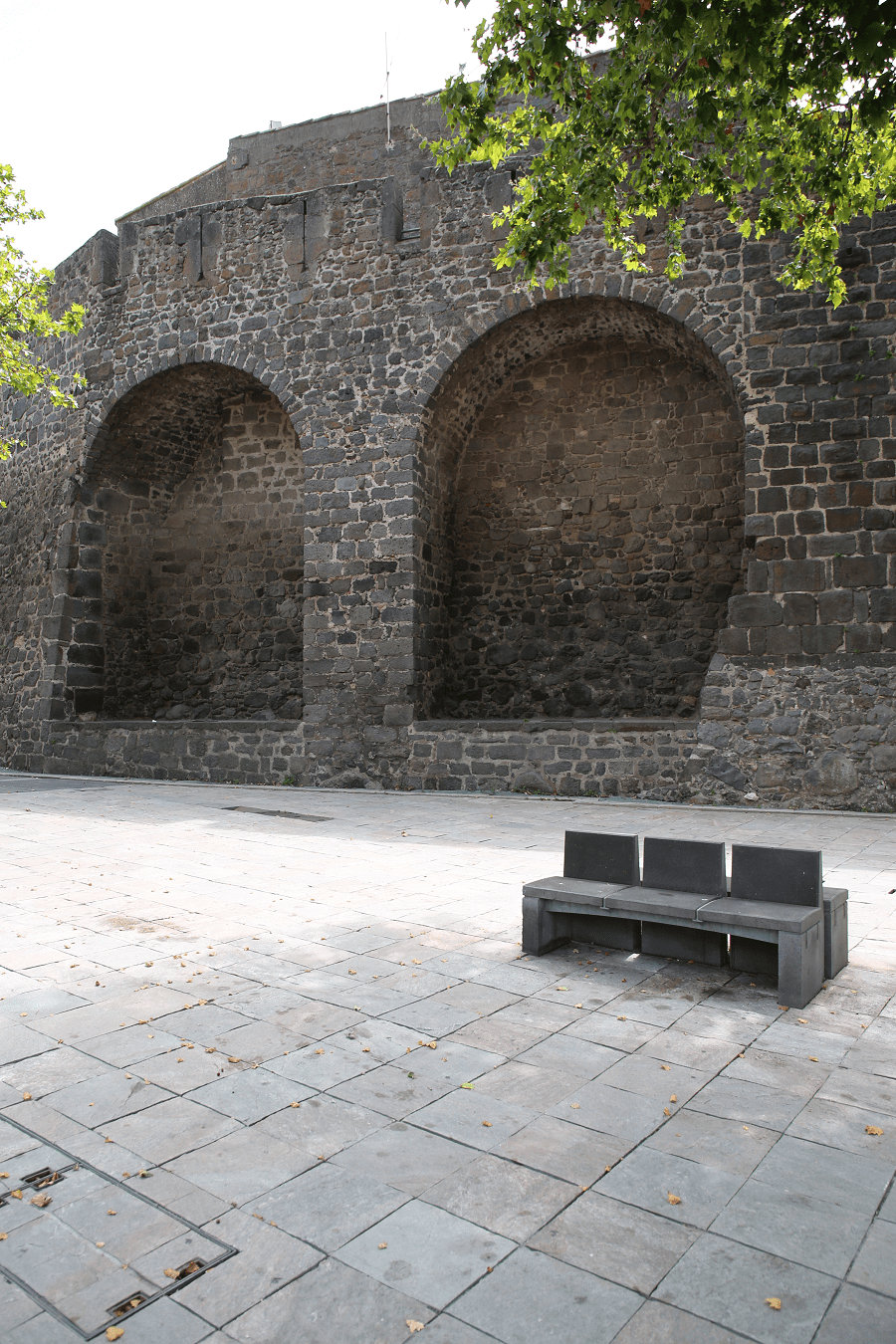 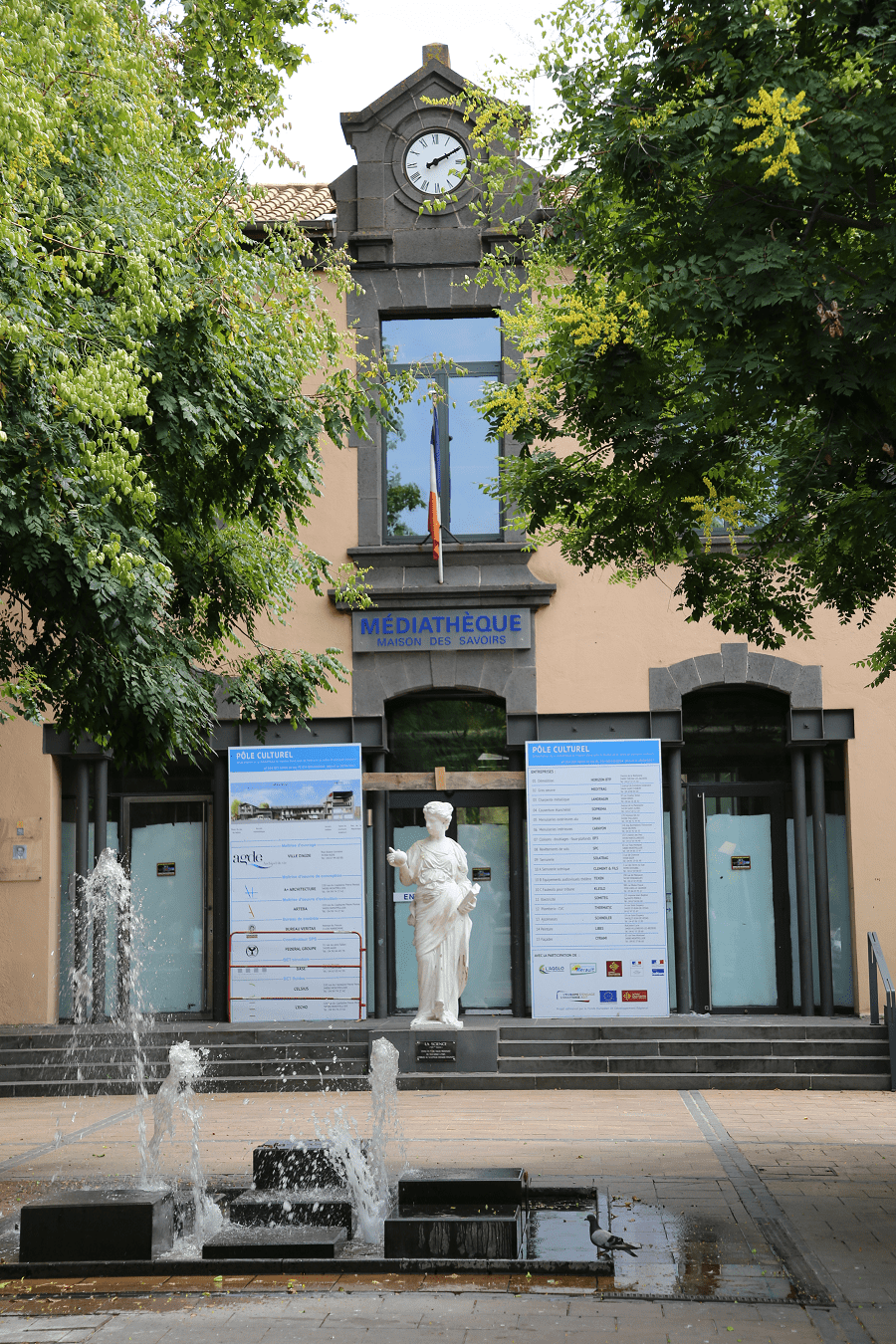 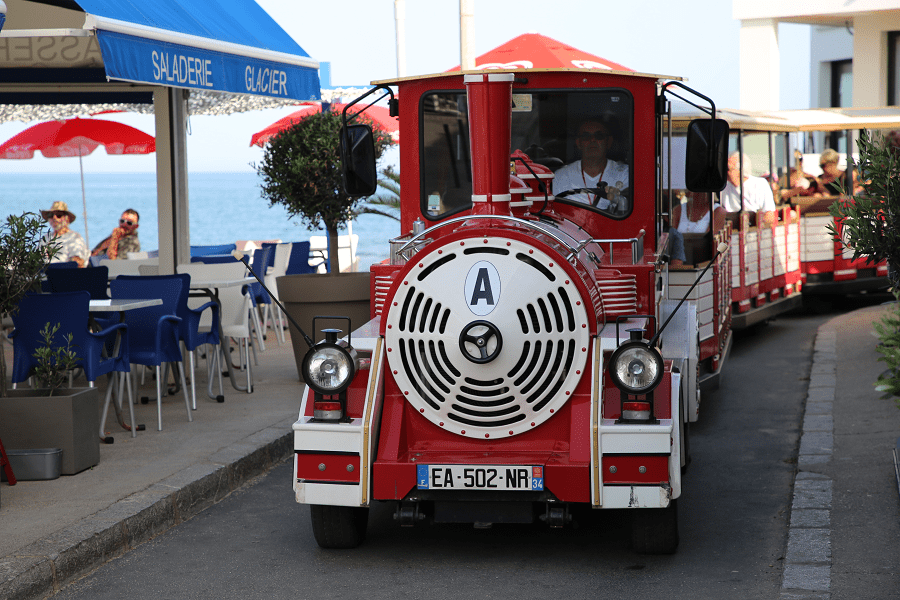