Andorra is the official сandidature to become a place for the Ibero - American Summit in 2020 • All PYRENEES · France, Spain, Andorra 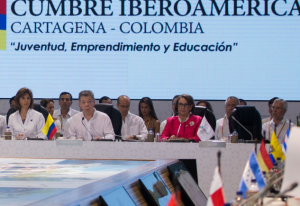 Ambassador of Andorra to Spain Jaume Gaytán and Director of International Cooperation SEGIB (la Secretaria General Iberoamericana) Gemma Cano sent a letter to the Secretary General of SEGIB, Rebeca Grynspan, in order to confirm the readiness of Andorra to become a place for the Ibero -American Summit in 2020.

The official status of Andorran сandidature was received in December 2016 during a summit in Cartagena de Indias, which was held with the participation of Andorran PM Antoni Marti. Within the framework of the summit, the secretariat of the SEGIB stressed the active role of Andorra in the life of the Latin American community, as well as the successful organization of a meeting of education ministers that took place last year in the principality.

Jaume Gaytan and Gemma Cano discussed this issue with the Spanish state secretary for cooperation of the Ibero-American countries, Fernando Garcia Casas, who also supported the candidacy of Andorra.

The 26th Ibero-American summit will be held in Antigua (Guatemala) at the end of 2018. The summit is held every two years with the participation of representatives of 22 countries. In December this year, the meeting of the foreign ministers of the Ibero-American countries will take place, at which the final decision on the summit in 2020 will be made.