A delegation from the Council of Europe headed by the Education Department's head, Sjur Bergan, visited Andorra • ALL ANDORRA 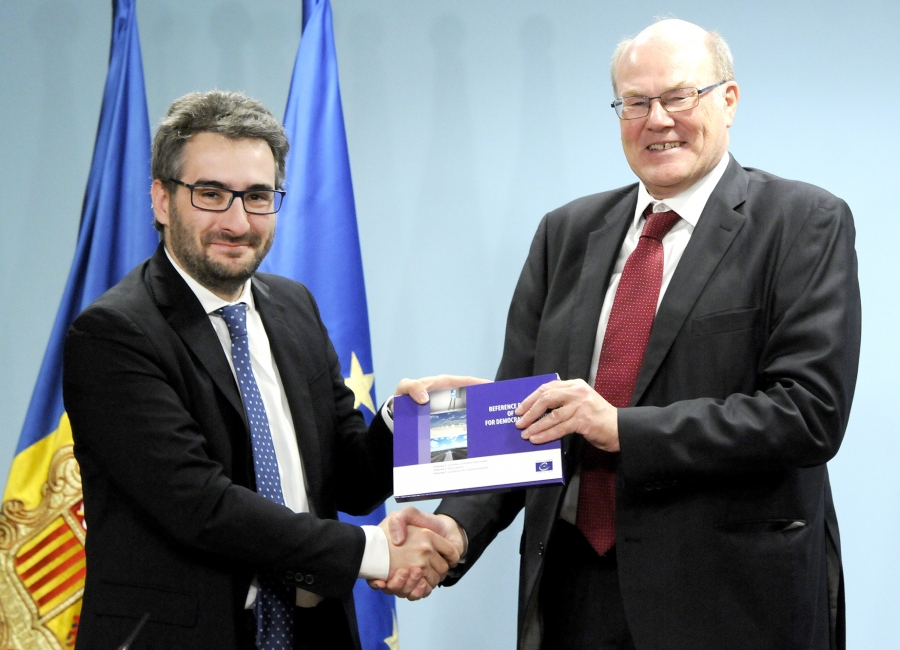 A delegation from the Council of Europe headed by the Education Department’s head, Sjur Bergan, visited Andorra this Monday and Tuesday to get to know first-hand the projects started in the country regarding education for a democratic citizenship. During his stay, he visited the Andorran secondary education school in Encamp, the Andorran school in Canillo and the University of Andorra, and participated in several meetings that have served to strengthen collaboration in this field.

The Minister of Education and Higher Education, Eric Jover, and the Head of Educational Area of the Council of Europe, Sjur Bergan, offered a press conference in which they showed the will to maintain and strengthen the work in all projects linked to the promotion of democratic citizenship.

The development of democratic citizenship is especially relevant in a European context where there is an increase in radicalism and populism. Thus, the democratic path is the one that allows us to build a citizenship that does not derive from these means, and in this sense Jover has assured that in Andorra this project has all perspectives, since it is a country that has grown thanks to immigration and that as he pointed out, must continue to maintain a cohesive society.

During the last few years the skills needed for democratic citizenship have already been included in the Andorran curriculum, but to further strengthen this element, teachers must be educated, and therefore, in addition to training those that are already part of the teaching staff, together with the University of Andorra, the bachelor’s and master’s degree in education sciences have been promoted, which is characterized by training regarding democratic citizenship.

For this reason, the delegation also participated in a meeting with the rector of the University of Andorra, Miquel Nicolau. Minister Jover explained that the aim is that this project could be internationalized by the Council of Europe. In fact, the training is expected to be semi-attended and carried out in some language, still to be defined, that will allow students from different member countries of the Council of Europe to attend.

In this line of internationalization, it has also been usual to hold a three-way meeting, in which the head of higher education of the Organization of Ibero-American States (OEI), Ana Capilla, also participated.

The Head of Education Area of the Council of Europe, Sjur Bergan, has shown full support for these projects and praised Andorra’s commitment to education in this field. In fact, he has been “fascinated” by the educational practices he has been able to see in Andorran schools, and made a specific mention of the reception room of the Andorran school in Encamp, where students introduced newcomers in Catalan, Spanish and French, and to the project of the students of the Andorran school in Canillo, who identified the spaces that they liked most within the parish and transferred it to the Council of the Commonwealth.

Finally, the Minister of Education and Higher Education announced that next week they will sign a joint action plan with Director of Democracy of the Council of Europe, Snežana Marković, to continue the joint work on this subject.
On Tuesday, the head of the Department of Education of the Council of Europe also offered a lecture addressed to students, teachers and executives of the Andorran School and the University of Andorra, entitled “The role of education in the development of the democracy of our societies to face up to the current challenges “.