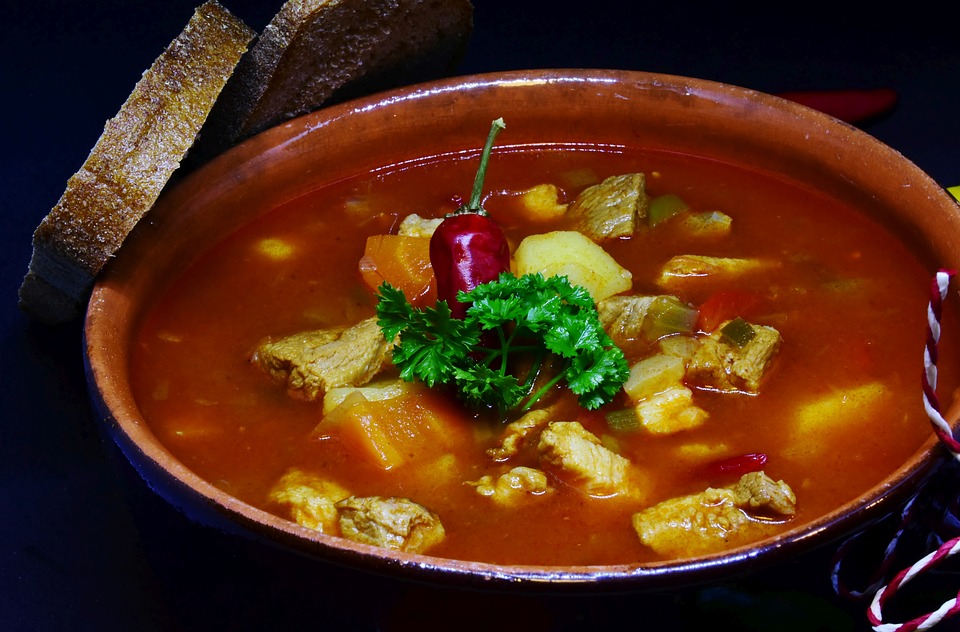 First comes the Encants. In times gone by, when the ground was hard with frost, every Andorran family that could afford it would butcher a pig to keep them in meat through the winter. Traditionally, on Sant Antoni, people donated pieces of their butchered pork: ears, trotters, hams, chops, sausages to be auctioned for charity. The rich were expected to bid way above the odds for things that they themselves may have donated. Today the tradition is alive and well. In 2014 the Encants of Escaldes-Engordany alone raised 7,560€. In the past the money went to the local priest. Today it often goes to the charity, Caritas, which, amongst other things, runs Andorra’s food bank.

Escudella, a hearty, meat-rich, soup, follows. It will probably contain pork, pork sausages and slices of large meat balls all cooked up with carrots, leeks, celery, potatoes, dry beans and noodles. And who said there’s no such thing as a Free Lunch? The parishes’ main squares sprout trestle tables topped with porrons of red wine whilst huge cauldrons, fuelled by stacks of firewood and stirred by men and women in traditional costume, brew up the stew. Being free, the queues are long so come warmly clad. Bring your soup bowl and spoon or buy one of the attractive commemorative earthenware bowls produced each year by the Comuns to help defray the actual cost of the ‘free’ meal. Some people have complete bowl collections dating back years. Others eagerly seek opportunities to fill gaps in their collection (An extract from Andorra Revealed by Clare Allcard).

FESTIVAL OF ENCANTS & ESCUDELLA OF SANT ANTONI
around Andorra on 17th, 19th and 26th January

LA MASSANA
Friday, 17th January from 11h. St. Anthony’s Day is also the day of the parish’s patron Saint, Sant Antoni. 11h Mass at the little chapel of Sant Antoni de la Grella. (This can be reached along the footpath by the river leading down to Andorra la Vella. Alternatively a free bus will leave from the central bus stop opposite the Comú at 10.30h and return at 12h. By road you can try to park with many other cars just below the Sant Antoni Tunnel where there will be police in their ceremonial uniforms directing the traffic. 12h the festivities move to the Plaça de Les Fontetes. Encants – a sung auction of various pieces of pork and other foods donated to raise money for charity. 13h Escudella – delicious, rich meat stew usually cooked in a cauldron – with the participation of the Sant Antoni Choir and the Esbart Dansaire Valls del Nord.

ENCAMP
Sunday, 19th January at 13h in the Plaça dels Arínsols. 13h The Encants de Sant Antoni, the traditional sung auction, performed in the presence of the parish priest with donated cakes, sausages, pig’s feet and more… All money collected goes to social works. 13.30h Escudella. If there is a traditional dish in Encamp par excellence it is the escudella or stew. So much so that, since 1987, it has become a popular holiday, the Escudella de Sant Antoni, which is held every year in Encamp on the Sunday closest to the festival of Sant Antoni and, in Pas de la Casa, one week later. More than 1,500 servings of escudella are distributed among the attendees, made with more than 3,000 meatballs, 700 litres of broth, chickens, bacon, rice, chickpeas, vegetables and the expert hands of the parish elders. Just before the blessing and tasting of the escudella. Each year new commemorative plates are produced. This year’s 2020 plate costs 8€. Some people have complete sets dating back decades. Why not start your collection now?

CANILLO
Sunday, 19th January at 13h at the Plaça del Telecabina. Vianda i Encants (meats and auction) The Comú invite you to enjoy with them the traditional vianda i encants of Sant Antoni. All donations for the Encants can be taken to the tourist office of Canillo until 18th January. The lots will be raffled off on the Sunday. Tickets for the Encants can be purchased for 1€ on the day. All proceeds will go to a charitable cause. The commemorative dishes for 2020 cost 8€ each.